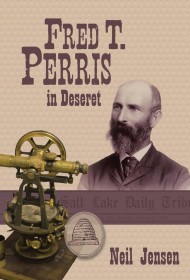 Author Neil Jensen had always heard that his father’s great uncle Fred was a “famous” man who built a railroad in southern California, ran a clothing store and had two towns named after him. His curiosity piqued, Jensen decided to dig further into his distant relative’s past and found that Fred T. Perris also played a significant role in the 1800s Utah Territory that the Mormons wanted to name Deseret.

Jensen’s book explores Perris’s life from the time his family fled plague-infested England for Australia, where Perris’s mother was approached by two Latter Day Saints missionaries who converted her and convinced her to move to the San Bernardino area of California. Fred found work there as a surveyor, but in 1857, the family headed to the Salt Lake Valley to help the Mormons fight to retain their independent empire in the territory.

While Perris initially worked as a surveyor there, by 1870 he became one of the founders of The Salt Lake Tribune, an independent paper rivaling the church-owned Deseret Evening News, and soon was labeled an “apostate troublemaker.” Perris also riled Mormon leader Brigham Young because of a labor dispute and later helped to organize the Liberal Party of Utah, which forced two-party politics into a one-party town. A few years later, he returned to San Bernardino to become county surveyor as well as chief engineer in helping to complete the second transcontinental railroad.

While Jensen’s account of his relative’s life is short, it is well written, informative, and chock-full of details that help flesh out this interesting and somewhat obscure time in the history of the Utah Territory. The book is embellished with nice black-and-white photos of various people and places mentioned, and the author’s sources are well notated.

The Fred T. Perris story will appeal to those interested in the early history and development of southern California and the Utah Territory, as well as in Mormon life and struggles.