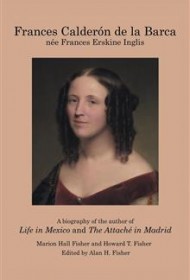 A good biography not only rescues a person’s character and history from oblivion, but also brings to life the flavor, events, and even minutia of the times in which that person lived. The Fishers’ meticulously researched biography of Frances Calderón de la Barca lives up to these criteria and delivers a vivid portrait of an acutely intelligent woman who often witnessed the events that shaped her era.

The authors skillfully chronicle Calderón’s transition from a child in Scotland, to teacher in America, wife of a Spanish diplomat and, finally, the companion of Spanish nobility. They also describe the social and political tides which shaped her life.

Calderón often found herself in the midst of uprisings in both Mexico and Spain, and where the authors quote from her journals, book (Life in Mexico), or letters, the effect is riveting. So too is her summing up of Santa Anna, one of the Mexican revolutionaries: “Yet here sat with this air de philosophe perhaps one of the worst men of the world—ambitious of power—greedy of money—and unprincipled—having feathered his nest at the expense of the republic….”

In contrast to the more eventful passages, the authors take care to present Calderón’s precise observations of her surroundings, both human and natural, and to highlight her slow blossoming friendships with such notaries as historian William H. Prescott, and Fanny Appleton, wife of Henry Wadsworth Longfellow. The insight and loyalty that she brought to these relationships also made her an invaluable ally to her husband and, later, to the Infanta Doña Isabel of Spain.

With the exception of a ponderously prolix first chapter (possibly written before the authors found their voice), Frances Calderón de la Barca is a compelling read indeed as it sheds light on a remarkable woman who lived fully and well in difficult times.