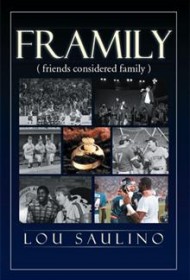 The final installment of author Lou Saulino’s trilogy – following “8” Center Field in New York, 1951-57 and Dopey Bastid – has, like its predecessors, sports at its core.

Spanning 1979-87, the story follows three childhood friends — sportswriter Joe Kowalski, engineer Lou Marciano and baseball coach Bob Murphy — as they move into their late 30s and 40s. The characters in the book are fictional; the sporting events at the narrative’s heart are fact.

Sports bonds the three — and by association, their wives — into a tight-knit group, a “framily.” They watch sporting events on TV together, attend games and endlessly discuss teams and players. Saulino paints a picture of family, though not a completely focused one.

The narrative presents some issues. Dialogue occasionally sounds as if it were written to advance the narrative or explain a point and can seem stilted. For example, of basketball star Patrick Ewing, one character says, “I’m glad he is going to be on our team now. I know that Little Louie feels that he will be dynamic in the pros at both ends of the court.”

Saulino sometimes switches tense awkwardly (“Grace, perhaps only half-jokingly, glanced at Bob and has a request”). His characters discuss “bucket lists,” although the term wasn’t coined until the early 2000s, well after the conversation took place. And for a book so heavily dependent on sports, there are a number of factual/editing errors. Indiana State University’s nickname is the Sycamores, not the Seminoles; Montreal’s hockey team is the Canadiens, not the Canadians; and the first name of a former New York basketball star is Micheal (Ray Richardson), not Michael.

Revisiting various sports events and athletes of the era —when was the last time anyone thought of Joe Pepitone? — should appeal to fans of a certain age. But Framily could have been stronger had Saulino given more depth to his characters and addressed the issues mentioned.