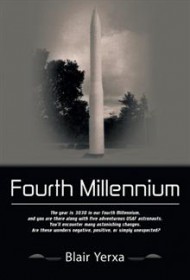 This futuristic adventure from author Blair Yerxa has an intriguing premise. Five Air Force members take a maiden flight of an experimental aircraft with near-warp speed capabilities and powered by a revolutionary anti-gravity drive system, only to return to Earth after a short mission to find that more than 1,000 years have passed.

After decades of reverse engineering, the United States has finally created its own anti-gravity-powered aircraft from the remains of an alien spacecraft that was found in the New Mexico desert back in 1947. It is the year 2013 when Major Tom Brice and crew take the craft up into Earth’s outer atmosphere to test its abilities. But when they return after a few days of orbiting the planet at nearly the speed of light, it’s 3030 and humankind has fundamentally changed. Everyone has the same uniformly bronze complexion. There are no rich or poor, no pollution, no disease, and no crime.

On the surface of things, it appears that the five adventurers have landed in a futuristic utopia. But deeper examination reveals a potential dark side — all terminally ill people are simply euthanized, the retarded or physically handicapped are sterilized, single-family housing and private ownership of vehicles has been banned, etc.

While compelling, there is nothing truly original about Yerxa’s vision of the future. The concept behind the social democracy of Yerxa’s Fourth Millennium is comparable to 2150 A.D. by Thea Alexander. Lois McMaster Bujold’s Vorkosigan saga dealt with anti-grav technology and genome manipulation. The nation’s capital is Denver — just like in Pat Frank’s post-apocalyptic classic Alas, Babylon (1959). The use of sentient machines is reminiscent of Asimov’s Robot sequence, etc.