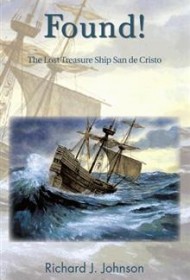 Anyone who has ever tried to break a spouse of a garage-sale habit will probably want to keep Richard J. Johnson’s Found! The Lost Treasure Ship San de Cristo out of the house. This story of four friends’ search for sunken treasure begins with Brad Mason’s impulsive purchase of an old book at an estate sale.

The book’s crumbling pages contain a map and an account of a Spanish galleon shipwrecked off the coast of Florida. In addition to the possibility of discovering wealth beyond reason – the ship was carrying gold, jewels and pearls – the four friends are equally drawn to a quest that will jolt them out of their successful-but-humdrum middle-aged lives. As one of them, Max, points out, they’re all fast approaching the point where “the chance of doing something that’s adventurous and risky will all be just about over for all of us.”

Found! contains many of the elements you might expect in any treasure hunt – wrangling among the friends, for example, and attempts by modern-day pirates to horn in on the treasure – but Johnson adds a delightful twist in detailing the logistical nightmares of a successful salvage operation. Finding a lot of gold is great; storing it is another matter. The guys need a bigger boat, as the weight threatens to sink the first one they’ve rented. And, once they’ve gotten their treasure home, there’s the touchy issue of how to cash in without raising legal eyebrows, not to mention the attention of the IRS.

Those thoroughly enjoyable dilemmas mitigate some grammatical issues and Johnson’s distracting practice of putting dialogue in italics. Readers will find a nice surprise in learning how the treasure ultimately affects the friends’ lives, one that’s reassuring enough to prompt a search through the Saturday garage sales for old books with mysterious maps.