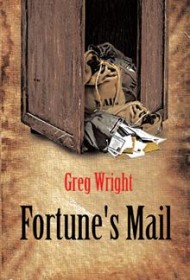 Fortune’s Mail is a collection of short stories joined by a clever premise: when the rural Florida post office where Winthrop Fortune worked closes, an enormous cache of undelivered mail is discovered. As the mail carriers try to put right what was neglected, the letters go out to their intended recipients, changing lives for better and worse. Each chapter after the introduction follows one letter and the consequences for its recipient.

In one story, Nathan, a frustrated chef, gets a letter from his grown son, now missing for several years after disappearing in Chile. He travels there to find out what happened to his boy. Other situations include a woman discovering that the father she’d thought dead is anything but; a woman receiving a letter confessing undying love (that—oops—was not intended for her); and delivery of a winning lottery ticket that opens up a world of possibilities for the recipient.

Author Greg Wright has a good ear for dialogue and convincingly sketches out settings as varied as a mobster hangout, the village hut where Nathan spends a night before venturing into the woods, and the old post office from which the story launches. He also gets family dynamics right; when a visiting uncle (Jeremy, in the chapter “Deborah’s Letter”) is pestered by his nephew about what he’s afraid of, he replies, “My greatest fear is that after cooking a small boy, he would not be completely dead and that he would squeal as I bit into his leg.” The boy’s mother doesn’t intervene, and before long the nephew’s fear gives way to another inane question.

Some of the stories end with O’Henry-like twists; others come to more logical or emotionally complex closure, but all are well rendered. The writing and description could be leaner, particularly in the opening, which feels balky and overstuffed. But overall, Fortune’s Mail is a highly enjoyable read, both clever in its execution and frequently moving.