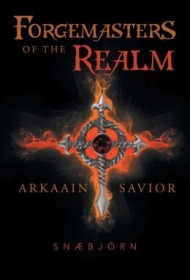 Set in a realm where elves, dwarves, and gnomes are being systematically persecuted by humans, this story chronicles the exodus of these races from the world of man and their quest to build a new society where all races are welcomed.

Unfortunately, the essential narrative elements that fantasy fans expect in their reading fare are conspicuously absent here. The world building is superficial at best and there is virtually no description of characters, settings, seasons, etc. The character development is equally shallow, as individuals aren’t described so much as labeled — Rober is an elf/human half breed; Stornef is a dwarf; Smapoly is a gnome, etc. — and they ultimately come across as two-dimensional stereotypes. (For example, the wizard named Helgi the Greyand has a long white beard and carries a staff — of course.)

The characters’ undertake a quest that is derivative of Tolkien’s Lord of the Rings: The elves are leaving the world of man. A fellowship of characters embark on a mission to save all of the races. There are huge spiders in the mountains. One of the main characters has a short sword that hums when danger is near—very much like Tolkien’s Sting. In short, there is nothing truly original or innovative about this novel.

But the biggest flaw is in the author’s writing style, which is awkward, hard to follow, and, at times, verging on indecipherable. In this sentence, for example, the author describes the weather: “The clouds drenched them in dews…Stefan was slapping his arms and legs to prevent his limbs from freezing. The feeling was beginning to quickly lose in them because of the numbing cold.”

The novel has an unfinished feel to it, as if this were the author’s first draft. All told — lack of character development, scene setting and originality — the story is unlikely to attract a wide readership.