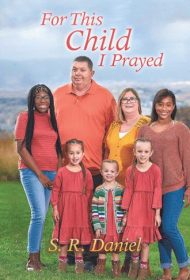 S.R. Daniel’s For This Child I Prayed, tells the story of her nontraditional family, with all of its joys and tragedies.

The Daniels, over the course of their 30-plus-year marriage, have adopted eight children, boys and girls who had been, by and large, failed by the system. The author details the problems she and her husband faced, from birth parents who neglected and abandoned their babies to racist friends (most of the Daniels’ children are minorities), to well-intentioned laws that can do more harm than good, to the challenges of raising eight kids. In the end, the Daniels overcame the obstacles, thus providing readers with more than just a memoir, but a blueprint for tackling such challenges. (The author also includes a short but important chapter listing steps prospective adoptive parents should take.)

Daniel’s writing is generally straightforward and basic. At times, though, it can be powerful, such as when she writes about viewing the body of her oldest son, who had committed suicide: “I assured them that I had no desire to traumatize myself further. I didn’t need to see his face to know it was my son. When I walked into the room, my knees gave way. I could tell from the doorway it was him. (A mother knows her child, no matter what the circumstances.)”

Still, For This Child I Prayed could be better. Daniel inexplicably leaves out important details. For example, she never says where the family lived, writing that they moved to a “new city” or a “bigger city.” She went 11 years without talking to her father, but never explains why. Her quest to adopt an African-American or biracial baby was blocked by the state they lived in—but she never names the state.

Readers will find such omissions frustrating and may wish for a fuller telling. But even so, Daniel’s story is interesting and heartfelt and could provide inspiration for those contemplating adoption.