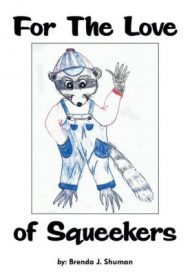 In Brenda J. Shuman’s children’s picture book For the Love of Squeekers, a raccoon looking for a birthday present for his mother finds trouble instead.

Squeekers, the youngest of a family of raccoons, is determined to find his own gift for his mother’s birthday party, rather than team with his siblings. He tries catching her some fish, even though he’s been warned not to go to the pond alone because of the mean alligator, Crocket, who lives there. Sure enough, when Squeekers gets tangled in a vine, Crocket moves in for the kill. Luckily, some woodland animals— an owl, possum, rabbit, and others—spring into action, rescuing Squeekers, who then invites them to Momma’s party.

The story is appropriately written for young readers’ sensibilities, maintaining a balance between urgency and relief; Squeekers’ close call will keep pre- and early elementary schoolers eagerly engaged without frightening them. The raccoon learns an important lesson— that warnings are given for a reason—and is likeable and relatable as the youngest sibling trying to prove himself.

The story is told in the charming narrative style of a southern raconteur, but this creates problems when combined with punctuation errors. Several sentences begin casually with “Now.” Without a comma following, it’s unclear if “Now” is just a placeholder meant to sound conversational, or if it indicates that an event is happening at that moment. The occasional unusual sentence structure (“Once upon a time there lived in a big old dark forest a family of raccoons.”) also detracts from the story, as does the excessive amount of text on each page, which may prove daunting for youngsters.

There are also issues with the hand-drawn art, which contains some inconsistencies; for example, brother Simon is half Papa’s size on the first page, while nearly as tall as his father on another.

Despite its flaws, For the Love of Squeekers weaves a pleasant tale (based on a real raccoon) that young children may enjoy.