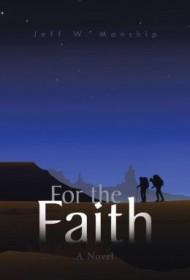 Jeff W. Manship’s compelling religious novel featuring four generations of the Mormon McMurdie family illustrates the sacrifices family members make for the sake of living in accordance with their faith. Their sacrifices and tragedies are presented with the implied underlying questions: Is it all worth it? Or does faith cause more harm than good?

Compelled by his devout 18-year-old son Jason’s death, Alan McMurdie grapples with his own faith. Jason committed suicide because his homosexuality broke Mormon precepts. He was made to feel unworthy of fulfilling the mission he had always dreamed of undertaking. Jason’s tragic death causes Alan to question the rightness of his own beliefs and turn for answers to the journals of Delwin McMurdie, his deceased father and a man who was also a devout follower of God and the Mormon Church. As Alan reads, he searches for clues about whether or not his father ever questioned the rightness of his own faith. In his quest, Alan reads about Delwin’s decision in the 1950s to forfeit the opportunity of earning a fortune mining uranium in order to take a mission trip to Arkansas for the Church.

Compounding the suicide of a son and the loss of a fortune, the story also depicts incidents of violence sustained for the sake of faith and the historic bloody massacre at Mountain Meadows performed by Mormons.

The story is emotionally gripping from the start and, except for a handful of proofreading errors, exceptionally executed overall as it aims to parallel Alan’s life with Jason’s and Delwin’s. Traces of metafiction appear when Manship has Alan undertake writing a book paralleling Alan’s own story of faith to his son’s and father’s.

Although the story focuses on the Mormon Church, readers of all faiths will find both the questions the book asks and the conclusions Alan reaches to be thought-provoking and, ultimately, satisfying. Even non-believers intrigued by an emotional human-interest story will find this a worthy choice.