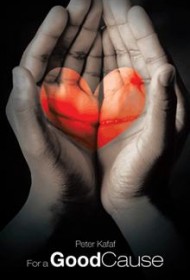 Peter Kafaf’s For a Good Cause has the bones of an intriguing novel. At its pivotal core is the Machiavellian question concerning whether the ends justify the means.

To give this inquiry flesh, Kafaf creates three male characters from disparate backgrounds. The characters, Jim Olive Jr., Nathan David, and Philip Spencer, become friends while attending the Harvard School of Business. Each has a cause that they want to support, but rather than using their business expertise to pursue conventional ways of raising money, they choose to form a high-priced hit squad. They deposit the proceeds from the hits in a foreign account and use the interest to fund their charities.

Through the years, they are paid extraordinary amounts to assassinate high-profile targets. The author models the victims, for the most part, on historical figures such as Princess Diana and Martin Luther King Jr. This borrowing from the lives of real people slows the novel’s momentum, as the reader is often distracted comparing the incidents in the book to the historical facts as he knows them.

The book is also marred by the author’s failure to truly inhabit his characters. Aside from a sketchy synoptic background for each, the author supplies little personal information for Jim, Nathan and Philip. Readers are given none of the telling details or that would allow them to relate to the characters.

Because there is so little character development, the novel’s central theme remains undeveloped. Readers never see the ramifications of doing wrong for a good cause, as there is little in the characters’ interior landscape or dialogue to bring that message home. The narrative voice is so distant and antiseptic that the central question might as well have been posed in a philosophy class. Consequently, in order to fulfill its promising potential, this novel would need a considerable rewrite with more fully imagined characters.