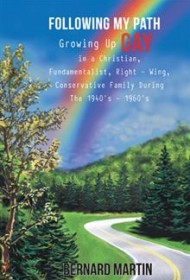 This memoir looks back at the life of a gay man whose childhood in small-town Indiana was anything but tolerant or easy. He nevertheless found his way in life and love, and recounts his journey here.

The good news is that author Bernard Martin has a charming voice and writing style, which come through in chatty asides to the reader (“This book is harder to write than I had imagined!”). He has survived a particularly virulent melanoma that left him disfigured and with speech impediments, so his decision to reach out to readers on the page is additionally moving.

That said, it must be noted that the book has several issues that hamper the reading experience. Martin’s narrative is quite disorganized. He talks a little about his childhood, then jumps into his teaching career, then complains three separate times about a principal he didn’t like (including some parting remarks in a lengthy “where are they now”-type recap of nearly 30 different people mentioned in the book). His tone is friendly but the specifics of his story are often hard to follow.

More notably, the book’s title implies that at least some of the story will be about growing up gay in the 1940’s-60’s. More than halfway through the book, Martin pauses to note, “As I read my before ‘I-turned-it-in manuscript,’ it was evident to me that I had not written enough about my personal feelings about growing up gay in this era.” The chapter that follows doesn’t add much in the way of detail.

Later on, he notes: “I started (the book) on a Tuesday and finished the following week on Wednesday. And I had two doctors’ appointments in between!” This may explain the breezy tone and plentiful technical issues.

Following My Path would need a thorough revision and serious copy edit to be of interest to a general readership; as written, it’s a challenging read. However, it would be a wonderful keepsake and heartfelt gift for friends, family and coworkers.