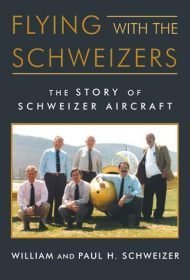 In 1929, brothers Ernie, William and Paul Schweizer launched more than their first glider in upstate New York: With their passion for flight, their engineering skills and entrepreneurial spirit, they soon took their “teenaged hobby” and formed a company that filled an important niche in aviation history for over 60 years. With evident and justifiable pride from its authors, this book tells the company’s story.

The narrative is written in two parts. The late William wrote the first half in the 1980s, and his son Paul H. finishes the story now. They must have both kept meticulous notes, as William remembers the exact day of the first glider flight, even the length and type of tow rope. They entered and won glider competitions, earned their engineering degrees, and founded Schweizer Aircraft Corporation (SAC) in 1939 to offer sailplanes to the public.

Soon came WWII, however, and the Army needed gliders. SAC filled a big part of that need. But the company had to compete and meet production deadlines under tough conditions, such as humidity that hurt their wood-gluing operations. During part of the war, SAC lost money with every glider it delivered.

The well-written book smoothly chronicles the ups, downs and eventual demise of the company into which the Schweizers invested so much love and toil. In time, they made helicopters, competed with bigger companies such as Bell and Fairchild, and often won subcontracts to build specific parts.

Dozens of photos illustrate the book, and there’s plenty written about this or that aircraft model. But the real story is the human one: the pain when a UAW strike nearly killed the company, the relief and gratitude when Toyota came to their rescue, and the heartbreak when Sikorsky bought them, then chewed them up and spit them out. The authors detail such moments with emotional authenticity.

All told, aviation history buffs and readers with eclectic tastes are sure to find the story fascinating.

BlueInk heads-up: Librarians should consider stocking this book for its contribution to aviation history.