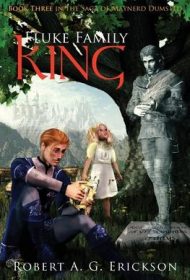 Robert A.G. Erickson knows the value of injecting humor into a fantasy epic. Fluke Family King is the entertaining, lighthearted, third installment in a series chronicling the exploits of Sir Maynerd Fluke Dumsted, a knight who doesn’t fit the standard fantasy-hero mold.

Although he boasts plenty of courage and impressive exploits, Dumsted lacks the wit, charm and social skills one expects of a protagonist in a sprawling tale featuring mystical creatures and magical deeds. At a ceremony declaring him a hero of the fictional realm of Gnaught, Dumsted has difficulty mingling with nobles without flubbing his words.

Dumsted’s bumbling is just one U-turn in this fantasy: There are minstrels who long to be rock ‘n’ roll stars, phantoms who gripe with their bosses in the underworld, and gnomes apt to deliver wry one-liners worthy of a BBC sitcom.

Erickson follows Dumsted in his quest to find his lost love, Fata Morgana, who disappeared to Luloo Land, a place nearly impossible to access, while being saddled by the king with uniting the four lands of Gnaught. At the same time, he faces the prospect of grisly death at age 18, thanks to the Fluke family curse, and is dogged by the demon Nog and his underlings.

Erickson packs a lot of action, magic and fantastical characters into this installment in the Fluke series, which tops 400 pages. Readers who haven’t read the first two books shouldn’t be lost, as the action is fairly self-explanatory, and the author offers backstories when needed. Even so, Erickson’s world is so expansive that it might seem overwhelming to newcomers. Happily, the author’s vivid descriptions, vibrant action and investment in his characters make the story approachable and compelling.

Mostly, Erickson’s commitment to incorporating levity makes this ambitious novel stand out. Although Dumsted faces the intimidating villains and unsettling danger essential to good fantasies, readers will enjoy plenty of fumbles, slapstick and laughs along the way.