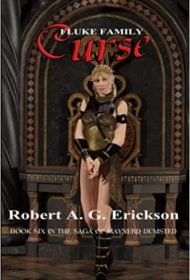 Within the first 15 pages of Robert A. G. Erickson’s new installment of his Maynerd Dumsted fantasy series, readers meet a varied cast of characters.

There’s Dandy May, a six-year-old entity with the shapeshifting powers of a mystical fairy; Fingis, a reformed villain and bumbling sorcerer; Corbin, a cursed black cat who can speak; gnomes, demons, sprites and other supporting characters. At the head of this cast is Erickson’s antihero, Maynerd Dumsted. As in past installments, this bumbling, lovable protagonist leads his ragtag band of companions through a set of harrowing adventures.

Here, the action revolves around a prophecy made by Demon Nog that predicts Maynerd’s death at age 18. Maynerd’s birthday is mere weeks away, and he’s saddled with the prospect of his own potential death.

Maynerd holds the dubious title of “King of Luloo Land,” an island held by enemy forces. The prophecy can only come true there. Nog, a comical demonic enemy, has devised a new stratagem to lure Maynerd and his allies — including Mithra, Maynerd’s wily, beautiful love interest—to the island, in order to see his prophecy realized and his foe destroyed. However, Nog has teamed with Maremar, king of the nefarious Demons of the Deep—a partnership with its own tensions.

As previously, Erickson offers readers a steady stream of action, adventure, magic and fantasy, anchored with humor, imagination and wit. This title echoes the mood and tone of its predecessors, and fans of the series will be comfortable jumping right back in.

Newcomers will find a lot of backstory to sift through, however, and the author’s commitment to an unending stream of action, exposition and magic can sometimes make the text feel hollow.

Still, for those seeking sheer fun set in an otherworldy environment, Erickson has refined a narrative style that offers plenty for fantasy fans to enjoy.