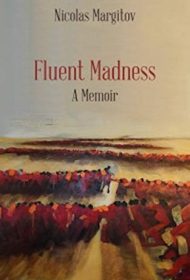 A precocious, creative child whose upbringing included world travel and aristocratic Belgian roots, the cultured Margitov’s adolescent appetite for cannabis and alcohol, combined with his father’s puzzling death, plunges him into a psychotic spiral. At 16, Margitov finds himself “well on addiction’s superhighway…I felt like getting high was a path to some kind of ephemeral wisdom … just one toke away from enlightenment.” Struggling to accept his father’s untimely death, his education is punctuated by manic, frenetic episodes.

His mother facilitates hospitalization, where heavily medicated, he’s forced to face his illness. But after release, plagued by relapses and drug abuse, his delusions of grandeur, paranoia (the CIA was watching him), and obsessions lead to re-hospitalizations. As grandiose notions subside, he comes to terms with the truth of his father’s suicide.

Leaving college in Vermont, he heads for Belgium and embraces a Bohemian existence with his privileged and wealthy cousin Lionel, but a doomed love affair again brings on bipolar mania and further nightmarish treatment that includes the use of restraints. At 23, writes Margitov, “I was a college dropout…an addict…plagued with a severe chemical imbalance in my brain. The outlook seemed grim.”

This memoir is simply and honestly told. There’s a touch of healthy, self-deprecating humor, particularly as Margitov recounts childhood escapades or his adolescent naiveté. While the prose occasionally drifts into a poetical stream of consciousness when reflecting the author’s bipolar thoughts or the song lyrics he writes, it doesn’t ramble, and the chronology remains clear.

Ultimately, readers will find this a believable, gritty, and hopeful portrait of the author’s mental health struggle.