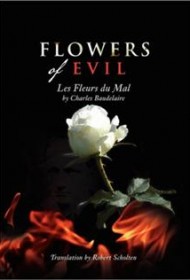 Scholten cleaves closely to the original in terms of stanza length and rhyme scheme and even line length; Les Fleurs du Mal is in alexandrines, a 12-syllable line, often with a caesura (pause) between the sixth and seventh syllable.

Unfortunately, Scholten’s rhymes are often facile, as in the poem “Spleen” (the third of four poems titled “Spleen”), which rhymes simplistic words such as the monosyllabic “old” and “cold” or “lame” and “game.” In the French, the rhymes stress the last syllables; this creates a stronger, more sophisticated ending to each line: “pluvieux” and “très-vieux” and “courbettes” and “d’autres bêtes.”

Scholten’s diction seems somewhat prim and overly literal, as in “The Fountain,” in which the first line — “Tes beaux yeux sont las, pauvre amante!” — becomes “Your eyes look so tired, my treasure!” American poet Anthony Hecht translates this and the lines that follow as, “My dear, your eyes are weary; / Rest them a little while. / Assume the languid posture / Of pleasure mixed with guile.” This is more successful in that it retains the feeling of the original’s caesuras, even though Hecht breaks the lines differently than Baudelaire. “Your eyes are weary” rather than “your eyes look so tired” is a more direct and forceful phrase with an iambic rhythm and includes consonance, whereas Scholten’s phrase lacks any musicality.

While admirers of Baudelaire may applaud Scholten’s labor of love, many readers will arrive at what seems to be an obvious question: There are so many highly skilled professional translations of Les Fleurs du Mal available from different eras, what would draw readers specifically to this one?