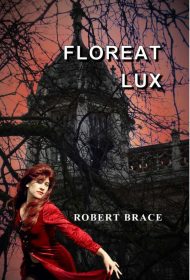 Robert Brace’s Floreat Lux is a wild, complex novel that blurs the line between the real and the supernatural, presenting a strange mix of art, religion, history, and even demonology.

Sabrina Lancaster is working on her postgrad at NYU Law School and writing a dissertation about the opinions of Supreme Court Justice Mariano Scaglietti, who Sabrina claims “was not a man for friends.” When Scaglietti passes away, his estate hires Sabrina to catalog his papers, and while going through them she discovers a disturbing letter that takes her to London seeking a rich recluse named Aneurin Bronaryre.

In London, Sabrina meets with Bronaryre’s lawyer, who tells her his client is convinced he’s the Devil. Sabrina is offered a job as Bronaryre’s amanuensis: “He will tell you his story, and you—should you so choose—will write the book.” After accepting the job, Sabrina’s life changes, and what follows is a psychedelic trip through literature, history, and art.

Floreat Lux is a multilayered novel with lots of dialogue and a plethora of elements—including detailed chronicles of events and descriptions of the Thames and its shores, St. Paul’s cathedral, etc.— with Sabrina’s life and experiences at the center. The pace is enjoyable and the topics relevant, but ultimately the amalgamation overpowers the main narrative.

Even so, there are some shining moments, like when Sabrina is being sanctified: “A pool of blood appears on the floor, fresher than that of the fowl earlier…and soon it is inches deep, splashing in from some unseen source. The creature cups her hands to form a bowl, then bends her head and vomits blood into them…. She holds out her hands in a gesture of offering.” There is also unexpected humor: “So the Devil is a Harvard man—Yale had it right all along.”

Readers will find many interesting passages here. Still, Floreat Lux is one of those rare stories in which doing less would have meant delivering more.