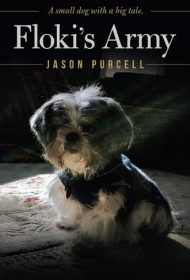 Author Jason Purcell’s book has two purposes: First, to tell the story of Floki, a puppy mill survivor who spent a decade being abused and used for breeding before Purcell and his wife adopted him. And second, to educate readers about the puppy breeding industry.

Most of the book tells Floki’s story. The author knows little about the tiny Shih Tzu’s first ten years, other than that extreme cruelty had rendered him blinded and scarred, as well as crippled from his confinement. Based on these physical conditions and what Purcell knows of the puppy industry, he imagines the dog’s early years.

In his narrative, a dog known as ST-5, is kept on a farm for breeding purposes. As the dog nears the end of his usefulness to the breeder and is about to be killed, a young woman who has worked at the farm for years, and fallen in love with the animal, whisks him away to a local rescue. A second rescue brings him to Chicago, where the Purcells adopt him.

This is where the nonfiction narrative begins, explaining how the dog—now named Floki—eventually overcomes his physical problems and blossoms.

In a few chapters at book’s end, Purcell also discusses the ugly side of the puppy industry, from abhorrent mills to the “rescues” and veterinarians that prey on dog lovers to pad their bank accounts.

Purcell admits he’s not a writer. Indeed, Floki’s Army could use better copyediting. Punctuation is haphazard, including frequently misused apostrophes, among other technical errors. (For example, a farmhand tells the young girl on her first day at the farm: “Well your taking away from my hour’s little girl.”)

Also, while the early chapters provide a readable back story, with some educational information woven in, it’s disappointing to find that much of the book is fiction.

Nonetheless, Purcell delivers an important message about animal cruelty. And through his web site (flokisarmy.com), he offers ways for readers to get involved.