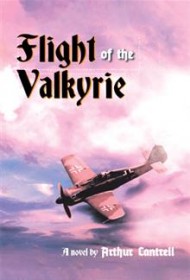 This engaging military espionage novel takes the reader on a wild, twisting swashbuckler of a ride through the last days of World War II as Max Schreiber’s German special forces teams overcome impossible odds in mission after mission, culminating in a daring attempt to steal an atomic bomb.

Replete with accurate historical detail and vivid characterization, Arthur Cantrell’s novel imaginatively captures both the fog of battle and the intrigues and treachery of various factions struggling against each other in the chaos of 1945 Germany. With the war all but over, Heinrich Himmler conceives a mad plot to steal an atomic bomb as a negotiating tool, and sends Schreiber’s team off to America. They make their way to Maine in a long-range Flying Boat, then to Los Alamos — with Himmler’s assassin who’s ready to explode the bomb imbedded in their midst — and, well, you’ll have to read the book for the rest of the story.

Unfortunately, two flaws mar this page-turner’s wild ride. The book begins with a scene in 1990 in El Paso, Texas, in the “Luftwaffe Headquarters of North America,” where phrases like “Herr General” and “Herr Oberst” by German-named officers mislead readers into thinking this might be a work of alternative history. The scene is never adequately explained (how is it that the U.S. Air Force has permitted a foreign government to have an official headquarters on U.S. soil?; or are these American Air Force officers?) and is, therefore, ultimately disappointing. There are also numerous spelling, grammatical and composition errors. Good editing would have resolved both of these issues and made this a novel to remember.

Despite these flaws, the author’s intricate knowledge of elite units of the Third Reich, such as the Brandenburgers, the inclusion of major historical characters such as the famed commando leader Otto Skorzeny and the otherwise well-executed plot will delight readers and keep them eagerly turning pages.