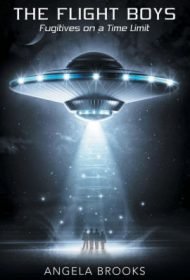 The story begins with Harry’s discoveries about his father’s top-secret mission involving a special aircraft at the Royal Australian Air Force base. Disguising his interest as research for school, he brings along three classmates (flight-obsessed Robbie, cowardly Jack, and obnoxious Max) to examine the invention without his father’s knowledge. Knowing it’s a “unique craft” capable of “unimaginable speed,” Harry learns the unit is actually a spacecraft operated by a psychotic female computer named Candy, which is capable of sending the boys into outer space.

One thing leads to another, and the boys find themselves soaring toward Pluto in about an hour’s time. Once there, they disembark to explore the planet with a strict warning from Candy: “Remember, twenty-four hours and the spacecraft leaves, with or without you. Is that understood?” That amount of time would have been sufficient for the boys to explore Pluto—if they hadn’t been caught by aliens and sentenced to execution. The countdown from 24 hours includes fast-paced action and a mild flirtation with an alien girl.

The language, plot, and themes are appropriate for young adult readers—particularly boys, who may best relate to the predominately male characters and the repeated humor about Max’s crush on Paris Hilton, flatulent flowers on Pluto, and Candy’s penchant for playing mind games.

The lessons learned (and in Max’s case not learned) also fit well for the age group. The boys must face their fears, each other’s criticism, and their parents when they make it back home after their unintended voyage.

This is a fun book—one that easily could serve as a launching pad for future stories that explore additional planets.