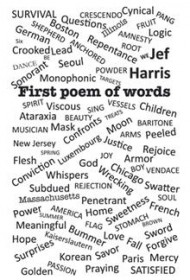 Jef Harris’ collection of poetry is filled with the specificity of a traveler, an observer of all things that catch the eye. And no subject is too small for his observations. From the crooked mouth of a singer in Seoul, South Korea, to the desire to get naked and dance after seeing Michelangelo’s David, the worldview presented in Harris’ poems surprises and often delights.

Poems in First Poem of Words range from haikus and TriWords (a form of the author’s own invention) to more melodic poems using rhyme, rhythm and refrains. A natural storyteller, Harris is most effective with poems involving travel. The first poem, “Paris 1980,” tells the story of how he and other men lifted and moved a car in order to park a bus in Paris. It ends with the note of explanation for the Renault’s owner that was never left, as he did not know French at the time. Another travel poem about his childhood home of Chicago is enchanting for its tension between loving a long-ago place and feeling that he should be spiritually located in the here and now.

Serious readers of poetry might struggle with the lack of revision in Harris’ poems. While it’s easy to love a word or line because it sounds good to the inner ear, it’s a sign of weakness in poetry not to support these sounds with equally appropriate meaning. His TriWords, which place three words together based on their sound, are a troubling example of the lack of unity between sound and sense in his work.

Novice poetry readers, however, may find Harris’ playfulness with words intriguing and his sincerity welcoming. The photographs and illustrations enhance the themes of the poems.