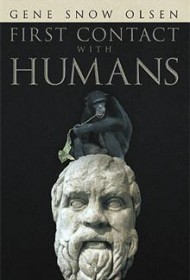 From Kurt Vonnegut, to P.K. Dick, to Gene Roddenberry, science fiction has been a vehicle for social commentary. Author Gene Snow Olsen writes in this tradition in his novel, First Contact With Humans. Environmental degradation and the distrust of concentrations of power is one of Olsen’s themes. Another is the differences between the sexes, which the author seems to suggest are universal and hard-wired.

As the book begins, a spaceship leaves earth in the face of environmental disaster, carrying a colony to a new world. This second earth, however, has a personality, a planet-wide consciousness that controls conditions on the planet. Called “Jason” by one of the human colonists, this mysterious alien exists as a sentient, electrically charged web of metal beneath the surface of the planet. The alien has created a clone of itself that it calls Two, which acts as a companion and interlocutor for Jason.

When Jason demonstrates his power by changing the conditions on the planet to accommodate his human guests, the founders of the colony become fearful and suspicious. Jason faces the moral dilemma of intervening in the humans’ conflicts, in order to save himself and his new friends.

Unfortunately, Olsen introduces a deus ex machina to resolve the tension in his plot. Jason deflects the book’s main conflict in a way that the character himself, let alone readers, cannot comprehend. A promising science fiction premise fails to reach a satisfying conclusion. Another drawback is that his characters’ voices sound too much alike; Olsen’s dialogue seems as if it comes out of the same mouth, no matter who is speaking.

Additionally, the author’s consistent characterization of women as emotional and empathetic, while men are rational and pragmatic, plays on stereotypes. Feminists beware.

Despite its flaws, Olsen’s plot is engaging, the pace is swift, and the reader cares about his characters. On his back cover, the author promises an entertaining science fiction read. For the most part, he delivers.