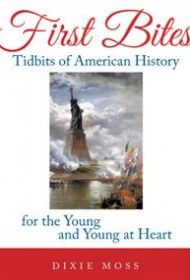 From Columbus’s discovery of America to the moon landing, First Bites recounts snippets of American history in rhyming verse. Each poem is also accompanied by illustrations and a descriptive passage with more background information.

First Bites is intended to present young readers with important pieces of American history. It mixes both high-profile events, such as the first Thanksgiving, with pieces of history that have slipped under the radar, including the closing of livery stables after automobiles arrived. The book also features personal moments in the author’s life, including memories of family Christmas traditions. This approach often causes the book to feel scattered and disconnected from its stated objective.

Of greater concern, however, are First Bites’ jarring cultural references and overly rosy descriptions of many troubling aspects of American history. Perhaps the author was trying to shield children from dark truths, but the omissions do them a disservice.

A poem about slavery, for example, focuses on the spirituals slaves sang to “pass the time working in the fields.” While the entry that follows discusses the Underground Railroad, noting that “Before the Civil War, many slaves wanted to escape to the North,” nowhere does the author offer the important context of why slaves were so desperate to escape. In another poem, the author notes that her uncles and cousins who fought in WWII “came back, all safe and sound.” A mention of those who did not is critically missing in this and other WWII entries.

The book also presents lapses in political correctness. Consider “Fun Words”:  “I think Indian words are fun./I like the feel of them on my tongue./ Words like ‘Skookum’ and ‘Winnemucca’,/If you’ve got bad skookum,/you’re OUTALUCCA!”

Well intended despite all, First Bites offers an interesting approach to U.S. history, and many of the pieces are fun and engaging. But taken as a whole, the book presents an uneven and often-problematic view of America’s past that detracts from its value to young readers.