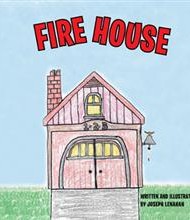 Kids love firefighters – they’re brave, heroic, and, like police officers, what they do is easy for young children to understand. Fire House 1-2-3, written by longtime New York volunteer firefighter Joseph Lenahan, aims to familiarize children with the tools of the firefighting trade, while also teaching them the numbers 1 through 10.

Fire House 1-2-3 is a simple book. The first page displays drawings of a group of firefighting tools, such as a ladder, gloves and flashlight. This is followed by a series of two-page spreads, each explaining how the tools are used and then showing a number of those tools, which the child is asked to count.

Lenahan uses a basic fact-and-call-for-response format to make the book interactive:
“Firefighters carry flashlights to help them see through thick smoke!/How many flash lights [sic] are inside the fire house?”

The author illustrates the book himself, and while his drawings are unpolished, they have a kind of raw, childlike charm. However, this rawness goes a bit too far, as the illustrations are colored in crayon, which leaves familiar “white spaces” between crayon strokes, and doesn’t reproduce well on the page. Combined with the slanted, unruled lines on Lenahan’s house illustrations, the overall impression often veers from simple and charming to amateurish.

The general appeal of the book is somewhat limited because of the visual shortcomings and a few key misspellings (“fire house” instead of “firehouse” and “flash lights” for “flashlights,” for example), but for toddlers who are intrigued by those big red trucks or who have just visited the local firehouse for the first time, those flaws probably won’t matter. For them, Fire House 1-2-3 might be just the right book to cuddle up with and learn some early counting skills.