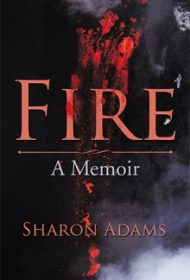 In her memoir, Fire, Sharon Adams, a survivor of domestic and sexual abuse, recounts her lifetime journey toward healing and healthy living.

Chronologically ordered with chapters spanning 1966-2007, Adams begins as a young woman trying to make it on her own in Chicago. She colorfully describes both the good and the bad of the city’s ’60s and ’70s counterculture: free love, feminism, homosexuality, socialism, sexism, drugs, and born-again Buddhism.

With unflinching detail, Adams relives the sexual and psychological abuse she sustained at that time. Her string of lovers includes a vicious hippy who forces her to have sex, an angry, verbally abusive closeted homosexual, and a manipulative hippy freeloader who can’t seem to keep a job. Through therapy and self-reflection, she grapples to fix the destructive behavioral patterns that resulted from the beatings she received from her parents as a child and to overcome the psychological trauma of them telling her they wished she had died as a baby.

In 1983, Adams, finally finds a loving relationship with her future husband, Roger. She moves to San Francisco where she begins her life anew, pursuing social activism, writing, and supportive friendships.

Adam’s memoir gives insight into the psychology of survivors of childhood trauma and sexual abuse. Her writing is always brave and honest, sometimes poetic, and ultimately achieves her goal of communicating to others that: “You do not have to be a prisoner of the voice in your head with its message of unworthiness.”

Because of Adam’s difficult life experiences, however, Fire is not an easy read. The narrative struggles with cohesion—sometimes it tends toward the disjointed, therapeutic language of a private diary —and the morass of acquaintances that come and go can be challenging to follow. It’s mostly likely to appeal to sociologists, psychologists, therapists and other specialists, rather than a general audience.

Whatever the audience, it’s certainly a praiseworthy exercise in facing one’s demons in order to help others do the same.