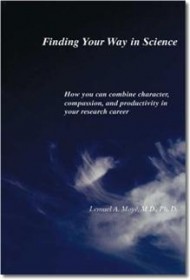 With his Finding Your Way in Science, Lemuel A. Moyé offers a comprehensive handbook for graduate students and scientists in the early stages of their careers.

The book begins with a portrait of a junior researcher, Carol, whose life is spiraling out of control.  Unable to keep up with the increasing demands of her team leader and seemingly helpless to defend herself against his enmity, she eventually resigns her position.

Carol’s predicament, Moyé indicates, is typical for researchers in the scientific field, and his book sets forth several corrective measures to help stabilize them in the genesis of their profession. Chief among these measures, Moyé stresses, is the existential requisite for developing a sense of self-worth separate from one’s profession or the opinion of others.

After exploring coping mechanisms, Moyé goes on to give advice concerning every aspect of the researcher’s life, from how to select a mentor to the development of collegiality, from an assessment of experimental protocols to the best ways to publish, and from the necessity for administrative work to the importance of a strong sense of ethics.

Because Moyé’s book is not only lucid and thoughtful, but also sensitively written, it should serve as a welcome handbook and as a source of consolation for the beleaguered fledging scientist.  The book, however, needs editing to make it ready for mass production. The text’s typos and subject-verb agreement problems become distracting, as do other random errors. For instance, in section 2.10.4, Moyé misnames “resistentialism,” calling it “residentialism,” and fails to attribute the creation of this word and concept to Paul Jennings’ humorous disquisition on the malicious behavior of inanimate objects.

With some editing and corrections however, Moyé’s book would serve as an excellent guide to anyone on the verge of a scientific career.