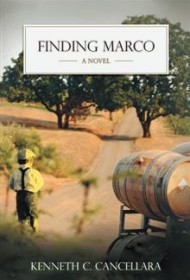 Finding Marco, a novel of clashing cultures and identities, follows one man’s struggle to come to terms with himself and the conflicting worlds he inhabits. Unfortunately,his struggle unfolds in predictable ways toward equally predictable ends.

Author Kenneth C. Cancellara’s prologue opens to a scene of 6-year-old Marco Gentile joyfully running home from school in the Italian village of Acerenza in the Southern Apennines. From Italy, the narrative moves to Toronto, following Marco (now Mark) through a successful legal career to leadership of an innovative automobile manufacturing company.

Triumph follows triumph until a recession and fluctuating oil prices bring the company’s profit margin down and Mark into conflict with the board of directors and its relentlessly short-sighted chairman. Mark resigns in a fury with the unwavering support of his wife and daughter and heads off alone for Italy to become Marco again and to search out “a balanced life.”

Once back in Acerenza (Cancellara’s birthplace), the novel embarks on an overly long rhapsody on the town, its inhabitants, traditions, food, wine and the surrounding landscape, as well as on Italy itself. Naturally, Marco is entranced by the village and the memories it triggers, as are his wife and daughter when they finally join him.

But how is a former corporate star to wrest a living from this paradise? Mark returns to Toronto determined that “I no longer want to be a slave to corporate schedules” and equally determined to live at least part of his future in Acerenza. As readers will easily predict, it all works out.

Much of the novel reads like a travel brochure. Additionally, its characterizations tend toward the simplistic (one businessman is described as “depraved”) and much of it consists of set pieces on conflicting cultures, at the expense of a compelling, driving story. Still, Finding Marco offers some entertainingly chilly scenes of business shenanigans as well as a shimmering portrait of Italy and Italians that some readers might enjoy.