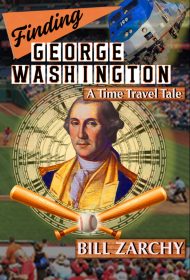 Finding George Washington’s plot sounds like an elevator pitch for a high-concept movie: America’s future first president disappears from Valley Forge in 1778, awakening in the San Francisco Bay Area in 2014. Washington’s absence from the Revolutionary War creates present-day consequences that threaten the very fabric of reality—unless he can return to his proper place in history.

While Washington’s plight is the inciting incident, the book’s central character is Tim, a young man who happens across the founding father at a Bay Area dog park. Tim takes in Washington and, once joined by Tim’s best friend Matt, they work to learn what caused the time travel, how to remedy it—and why some dangerous characters are hell-bent to stop them.

This is a fish-out-of-water tale that explicitly references its time-travel influences, including A Connecticut Yankee in King Arthur’s Court, Back to the Future and even Hot Tub Time Machine. The book has well-developed characters, entertaining adventures (including a cross-country train trek), and fun moments. But it’s also overlong, with too much explanation and occasional graphic violence that’s jarring considering the lighter tone established earlier.

A baseball subplot (regarding the San Francisco Giants’ 2014 World Series campaign) doesn’t quite work, especially when the ticking-clock element ratchets up. When you’ve been shot twice by would-be assassins and America as you know it is rapidly disappearing, whether the Giants win the title likely wouldn’t matter as much as is portrayed here. The novel also explores deeper themes, some pertinent (Washington’s role as a slave owner is of particular concern to Matt, who’s biracial), some decidedly less so.

Nonetheless, the book remains engaging throughout, with only a few minor errors, mostly concerning the 1976 horror film Carrie (e.g., Sissy Spacek’s name is misspelled, and teleportation is referenced instead of telekinesis).

While the novel would benefit from a tighter structure to improve focus and pace, history buffs with an appreciation for time-travel tropes should find much to like here.