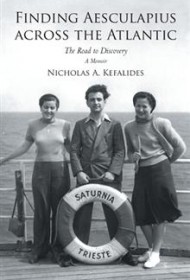 Early in his memoir, Finding Aesculapius Across the Atlantic, Nicholas Kefalides tells readers that Aesculapius is the god of medicine and healing in ancient Greek religion. This bit of esoterica sets the tone for the book, which describes Kefalides’ medical career from its beginnings in Greece, where he graduated from high school before sailing to the United States in 1947 to pursue undergraduate and graduate studies. He won acclaim for his research into skin burns, infection and shock in burn victims.

After a 10-year deferral from military service for his studies, Kefalides, in July, 1957, received a commission from President Eisenhower to the U.S. Public Health Service with the rank of lieutenant commander. He worked in Lima, Peru, as the project director at a National Institutes of Health grant-funded research center for burn victims inspired by the U.S. government’s Cold War-stoked fears of massive casualties in the event of a nuclear attack or accident.

With its setbacks and triumphs, Kefalides’ research, which continued after his return to the States, makes for fascinating reading — so far as it can be understood. But some of his descriptions are too complex for the ordinary reader. For example: “Although I had made major strides in identifying the major macromolecular components of basement membranes, I was still faced with . . . questions, such as the intracellular pathway of biosynthesis of the protein components . . . and the presence of proteoglycans in the composition of the membranes.”

While readers with medical or scientific training will appreciate the author’s highly technical passages detailing his findings, others will find some of his writing indecipherable. The greater value of his life’s work is clear; however, the nuances of Kefalides’ memoir are meant for a scientifically trained audience.