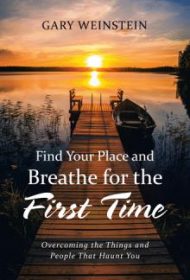 If Gary Weinstein’s credentials as a licensed clinical social worker, professor and past president of the National Alliance on Mental Illness don’t lend enough credibility to his new book, the simple but unique premise of Find Your Place and Breathe for the First Time: Overcoming the Things and People That Haunt You will.

Using 49 tenets that promise to “free you from incessant negative thoughts, emotional pain, and behaviors that haunt you,” Weinstein builds on the notion that life is not one long event, but a series of separate, manageable ones. He gives the example of a man fired from his job who can respond in two ways: head for the nearest bar, get drunk and become even more depressed, thereby continuing the firing event, or focus on finding a new job, thus creating a new event and freeing himself, at least somewhat, from the pain of loss.

Another key concept is that of engaging your core—the unalterable foundation of your identity and value—to get through hard times and avoid prolonged negativity. “Your value,” Weinstein reminds us, “does not need to be proved.”

Instructions for handling roadblocks that can keep you from “finding your place,” such as letting events victimize you and allowing challenging personalities to disrupt you, fill most of the chapters. The book ends with 33 action steps, an appendix about regaining balance after a death or other major loss, and a recap of the 49 tenets.

Despite some typos and early glitches—a couple of times, Weinstein suddenly switches to “he” and “she” anecdotes without identifying the people, distracting readers momentarily—the author is generally spot-on, especially with easy-to-grasp analogies like picturing barbs hurled in a work meeting as actual missiles to deflect with your core.

A meaty book at nearly 300 pages, Find Your Place is nonetheless a quick read that offers an interesting new twist on how to keep one’s perspective.