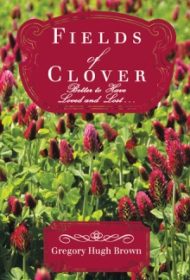 The author was inspired to write Fields of Clover by the 30 years of research his late brother conducted into family genealogy, learning, for example, that Elvis Presley was his mother’s fourth cousin. He also writes of long being puzzled by his grandfather Clover McKinley’s name. Not only is Clover an unusual name for a male, but it’s not common for a female, either. His musings on the subject lead him to the conclusion that his great grandparents, who were first cousins, conceived their son in the heat of passion in a field of clovers and named him for the flowers.

Early chapters put forth the family lineage: the scandals, legends, abandoned wives and unpleasant stepfathers. Subsequent chapters present a broader picture of historical events, such as the Civil War and the Brown family’s role in it. Another chapter chronicles in great detail the family’s Cherokee heritage and the ironic chain of events that saw the family purchasing land that the government has previously “as much as robbed from the Indians.”

Fields of Clover is rooted in extensive knowledge of the family’s history, but also embellished with tales Brown has created. While both work well in their place, and Brown is forthright about his tales, it can still be confusing at times as to which is fact or fiction. This is particularly true in the early pages of the chapter “Road’s End,” in which the title character meets his demise — an event based on fact — then becomes enmeshed in fictional developments without a clear transition between the two.

While the details of the family tree might get a bit dense for some, the history surrounding them soon picks up the pace. This is most likely to interest fans of genealogy, history and southern lore.