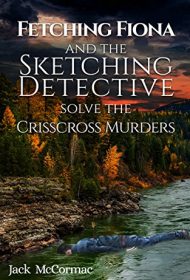 This is the seventh entry in author Jack McCormac’s cozy mystery series set in the fictional Southern hamlet of Bonnie Glen.

Police Chief Fat Joe Reynolds often turns for help to amateur sleuths Jack, a civil engineer, and his architect wife, Fiona. This time, two prominent men in the area—cousins—have been killed. Their widows, always top of the suspect list, have solid alibis: each was states away when her husband was murdered. Yet, Fiona and Jack learn that the women will receive the annual income from a $30 million-plus estate.

Then, the illegitimate child of a shared ancestor of the two murder victims shows up. She has a legitimate stake in that $30 million. Is she or her greedy boyfriend capable of murder?

Fat Joe suggests that the widows committed the crimes for each other—a crisscross! Indeed, the women admit to planning to kill each other’s husbands, only to find the men dead already, before they could do the deeds themselves. Ultimately, Fiona and Jack devise a plan to lure the person or persons responsible for the killings out of hiding.

Cozy mysteries are partly defined by a genteel, conversational tone. Here, though, Jack’s voice, and the sketches peppered throughout to help enlighten readers about key facets of the case, are unnaturally stiff. The town of Bonnie Glen has no local color or unique charm.

The novel’s main problem is that the plodding procession from the crime’s discovery to its resolution offers only a couple of red herrings, and the whodunit is largely mundane. Jack and Fiona don’t offer anything resembling clever insight or an entertaining aha! moment to prove their worth as successful amateur sleuths; they solve the case by asking obvious questions and making unsurprising observations of the evidence.

In sum, the story has little of the usual elements that would attract cozy mystery fans.

Also available as a paperback.