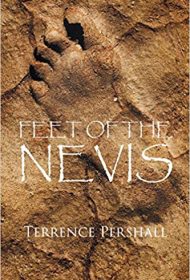 In Feet of the Nevis, author Terrence Pershall imagines a fantastical chapter in Earth’s history, one that takes place long before the advent of modern humans.

Pershall offers an alternative ancient story for the planet. Thousands of years after the dinosaurs perished, the Earth is populated by a mixture of intelligent inhabitants, including a race of indigenous people known as “Indios,” and another group of humanoids, a tribe with mysterious, off-planet origins and a much briefer history on the land that, thousands of years later, will be known as California.

Trasker, a 23-year-old who has just completed a five-year apprenticeship to learn his craft and trade, belongs to the latter tribe and, as it turns out, is key to uncovering the mysterious origins of his people. Shortly after he completes his studies with Quill, a father figure who teaches him to harvest the sea for food, raw materials and other resources, he returns to his native village, Fon En Diel.

There, he takes up a quest that killed his father 12 years before, namely to track down an ancient object that will reveal the true origins of their species. As they pursue this goal, Trasker and his newfound love Florin encounter the Sriques, the wolf/humanoid creatures that killed his father years earlier, led by the hulking pack-leader the Nevis.

Pershall offers heartfelt characters and engaging action. Trasker, in particular, stands out for his devotion to his father’s legacy and his dedication to Florin. The overarching drama of a people seeking their roots and their collective purpose is also an original engine for a fantasy story.

However, the execution of this core concept lacks precision and dynamism. The author often repeats concepts and details. This and the lack of proper punctuation creates a confusing structure, one that often feels more like a draft than a final product.

With greater polish, however, this could provide an intriguing take on the fantasy genre’s standard hero’s journey theme.