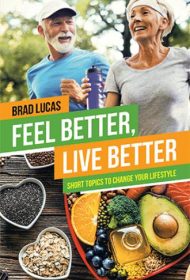 Lucas decided to change his life and become vegan after his parents’ deaths: his father from colon cancer at the age of 64, and his mother from heart disease (although she lived to be 92). Seeing their struggles, and inspired by Dr. N.W. Walker’s book, Diet and Salad, he decided to compile tips that helped him live healthier.

The topics are arranged alphabetically, from “Air Pollution” to “Zinc,” and each chapter ranges from one sentence to two pages. Lucas has an approachable tone of voice, and readers can sense his good intentions.

Still, the book has several flaws. His chapters have a stream-of-consciousness, hit-and-run feel to them. For example, “Rotation of Food” simply states: “It’s recommended you have a four-day rotation of food to help prevent food allergy.” “Romaine Lettuce” says: “It may have Escherichia coli, but I have had romaine lettuce and haven’t had a problem for sixty-two years. I assume washing it well gets it off.”

Lucas’s writing often contains grammatical errors, such non-agreement of subjects and verbs, as well as spelling. He proffers many unsupported claims. For example, the author writes that “Tofu offers protection against certain cancers”; that Escherichia coli can simply be washed off Romaine lettuce; and that “Aluminum may cause Alzheimer’s disease.”

The author also urges readers in dozens of chapters to “please search it up,” his way of telling them to look it up on the Internet. This is off-putting, as readers generally expect that the author has done such work for them.

Better editing might help the book reach an audience, as would a more fuller examination of each topic. As is, the volume is likely to have limited appeal.