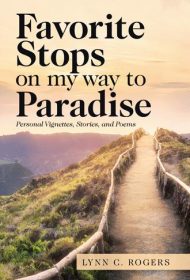 As a child in Maysville, Oklahoma, Lynn C. Rogers explored waterfalls along the Washita River that flowed through his family’s farm. As an attorney and research chemist, he found more challenging fishing waters in Canada and hunting spots in Idaho. Sometimes he found God there, too, stumbling into what he calls “thin places” where heaven and earth intersected like soap bubbles, allowing him a glimpse of the Paradise he intends to inhabit until Jesus returns for him on Judgment Day.

The chapters of Favorite Stops on my way to Paradise represent 30 or 40 years worth of writing that ranges from reverential to folksy (slugs are “[s]limy little outfits … and the fish think they are real delicacies”). Sometimes the two merge, as in the day Rogers was tracking an elk and came upon a heavenly oasis in the middle of the wilderness.

Among the author’s strongest works are an intriguing love poem entitled “The One Who Knocked on the Shutters” and a 35-page epic about a family fishing trip called “The Rogers Boys in Canada or Look Out, Wally, Here We Come.” Both paint graphic pictures – of a beautiful woman’s flirtation in the first and a routine lunch alongside a lake near Winnipeg in the second. The feast is made memorable by “the smell of the wood smoke and the fresh fish straight out of the cold, clear water.”

Rogers’ is a skillful writer, but too many unfortunate typos distract from his message. He also jumps from one topic to the next without providing context that could help readers understand who he is and why his stories matter. In the love poem, for example, why was his heart closed until his temptress knocked on the shutters, and who is she?

Without those important details, the book works best as a keepsake for family members who are already in the know.