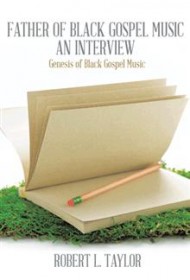 This short book reproduces a 1977 interview that Robert L. Taylor, a graduate student at the time, did with legendary gospel music songwriter Thomas A. Dorsey. Taylor was clearly in awe of his interview subject, who rambled through his career milestones during the conversation.

Dorsey is certainly worthy of serious biographical study. He authored some of the best-known songs of the black gospel canon, including Take My Hand, Precious Lord and Peace in the Valley, although he began his career as a randy blues singer with the stage name “Georgia Tom.” His best-known secular song was a 1928 hit with a less-than-subtle sexual overtone: Tight Like That.

Taylor quickly runs through Dorsey’s biography in the preface of this slim volume, then reprints his interview. With so little context, the interview doesn’t always make sense; some of his comments sound pointless or nonsensical. But there are some colorful musicological nuggets, such as when Taylor asks about early gospel highlights. “No, gospel music hadn’t come into being then,” Dorsey responds. “It was being made in me then. Howls and sad moans they had in blues, I brought over and put it in gospel music and made them work.”

Dorsey merged the emotional depth and physicality of the blues with the spirituality of existing gospel and practically invented a genre. When he couldn’t convince publishers to represent his music, he started his own publishing house and worked with all the names of the gospel world over the next decades, even after rock ’n’ roll and soul music became the heart of pop music.

This volume includes 20 pages of notes – more than the interview itself. It’s an interesting artifact but not a particularly helpful historical look at a significant American master. You’ll learn more from Wikipedia and recordings of his music than you’ll glean by thumbing through Father of Black Gospel Music: An Interview.