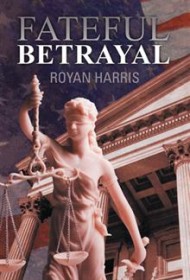 When U.S. Air Force Sergeant Tafari Spencer is caught trying to obtain U.S. visas fraudulently for his Jamaican friends, he faces charges of human trafficking both in Jamaica and the U.S. Spencer is innocent, but is unfairly railroaded by incompetent and unscrupulous agents, particularly Special Agent Bryce Glaudos of the U.S. Department of Homeland Security. Throughout Fateful Betrayal, Spencer has to combat Glaudos’s lies, while determining which friend set him up and why.

Author Royan Harris knows well the inner workings of his subject, from the intricate details of a military trial to the unsavory side of Jamaica. As a former U.S. military officer and Jamaican native, he has a flair for dialogue and setting, even using Jamaican dialect where appropriate: “…a call came in on my cell. Peterkin appeared on the ID and I answered, “Yow my your wat a gwaan? (Hey what’s going on?)”

Unfortunately, Harris throws out a confusing array of names and military titles, and readers won’t understand what’s really going on until more than 100 pages into the book, when the main character, Spencer, explains the sequence of events to his lawyer.

A more pressing problem, however, is Harris’s portrayal of his protagonist. Spencer may be innocent of the visa scam, but he’s not innocent of another, far worse crime. He’s the equivalent of Tony Soprano or Nucky Thompson — upright, honest, and loyal on one hand, vengeful and morally depraved on the other. But while television writers develop these characters over a season, giving fans a chance to explore their own complex feelings about the men, Harris chooses, instead, to focus on the trial, injustices, and betrayals, while ignoring the obvious moral dilemmas.

Harris’s story had the makings of a good thriller; the ending of the book is satisfying, if not conclusive. Those who stay with it will come away with complicated feelings about embracing a character that may or may not have always done the right thing.