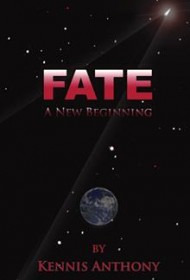 Kennis Anthony’s Fate: A New Beginning is Christian-themed romance (in the most chaste sense of the word) set against a science fiction backdrop.

Once, as children, Eric Miller showed kindness to Erica “Ricky” Myers, looking past her physical disabilities, but the moment was soon tarnished by an act of overt racism directed toward Eric by Ricky’s father. Now reunited in adulthood on a mission to test an experimental spacecraft, they have an opportunity to rekindle the feelings sparked by that fateful moment. Unfortunately, that too is threatened—not by the actions of others but by their individual beliefs.

Anthony weaves several subplots into Fate, with themes about questioning one’s faith, the power of prayer, and the pre-ordained plans of God. It is this last theme that threatens Eric and Ricky’s growing relationship – the question of whether or not they are on distinct and incompatible paths and, therefore, perhaps literally fated to be apart. From that description, it should be apparent that the book has a particular religious perspective, and it may have limited appeal to those who don’t share the author’s beliefs.

Regardless of worldview, Fate fails to deliver on a more fundamental level. The characters are one-dimensional, and while the primary source of tension stems from the protagonists’ relationship, the inciting event for their rekindling doesn’t take place until nearly halfway through the novel. This leaves readers wondering what or whom to root for until then. And if a novel is to be judged by how well it culminates that tension, readers may be disappointed by the lack of resolution provided by the author.

In the end, Fate poses an intriguing question (what happens when the sparks of childhood romance are rekindled as an adult?), but it is likely to leave readers frustrated by the lack of answers.