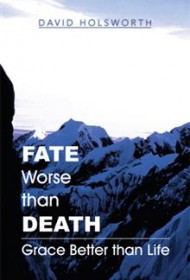 David Holsworth’s adventures as a mountaineer take him into perilous places, from the frozen waterfalls of the Canadian Rockies to the highest peak in North Africa. Despite many dangers, he fears only one thing: becoming disabled as a result of a climbing accident. But 30 years later, he finds himself in a wheelchair due to multiple sclerosis and reconsiders the fate he initially thought worse than death.

In his early mountaineering years, Hollsworth had dangled by one arm while climbing solo on an icefall; fallen while rock climbing and walked away unscathed; skied safely through avalanche terrain. Instead of allowing fear to stop him, he “went on in this style, and with each close call…felt more invincible.” This feeling led Holsworth on expeditions to Canada, Austria, Morocco, Algeria, Nepal, and Spain, where he met his first wife and had a son, Lorenzo.

With a family, Holsworth began to consider others more important than his climbing obsession. He also began to search for spiritual answers to help him make sense of his deepest questions. In the process, he learned that he had multiple sclerosis, a debilitating, incurable disease. He came to understand the ways in which “God was watching over [him] throughout those years” he spent climbing and how God transformed him “from a consummate risk taker to a man of reason.”

Holsworth’s account of his personal transformation in this slim volume would have been enhanced had it been expanded to include more of the mental and spiritual process that accompanied the change, but the vivid details of his adventures and the technical explanations of climbing terms will keep readers on track in this fast-paced story. His lucid writing style reads easily and presents the book’s deeper message without confounding it. By grace, Holsworth explains, he has confronted the fate he feared the most, and his story will inspire others to do the same.