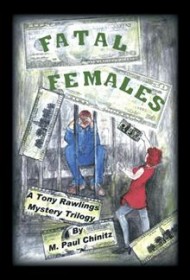 Considering its title, the dedication for this book is one of its best lines; it reads: “This book is dedicated to those who have loved as I have loved, a girl both wise and pretty.” The story then goes on to methodically chronicle the misadventures of a milquetoast accountant as he finds himself taken in and used by wantonly conniving and murderous femme fatales, er, fatal females.

Tony Rawlins is the type of guy whose life is perpetually upended by gals. Dumped by his disenfranchised wife, the CPA’s life spirals down to where he takes a small job in a print shop. Things then become all-too exciting when he meets an alluring woman through the personal ads. With a bit of sexual come-on, she soon sets Tony up for a murder conviction. She stages a scene where it appears Tony has killed her husband after being caught in flagrante delicto. Imprisoned, but innocent, Tony is soon released as new evidence points to his temptress, who has since disappeared.

The remainder of the story follows Tony’s attempts to prove his innocence in the original court case while trying to avoid further prosecution for the continued mayhem perpetrated by the women around him. How Rawlins manages to extricate himself from the estrogen-laced web of evil he has allowed himself to tumble into and come out less gullible than before is a tale only a guy could love.

While computers are mentioned briefly in the narrative, the story gives few clues as to when it takes place. Still, Fatal Females leaves the strangely bitter after taste of a 50’s noir thriller. The fact that this accountant has more women throw themselves at him than 007 could hope for makes it a throwback to a time that never was. Some may appreciate the slightly chauvinistic tone, just as some prefer Anagostura bitters with their bourbon. If that is your thing, then put on a figurative fedora and a wide tie and pour yourself a glass of rye before joining Tony on his fatal adventures.