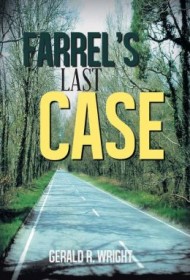 British Chief Inspector Ian Farrel is a familiar figure in mystery novels: a divorced, rumpled, cranky chap who hasn’t slept, eaten, or copulated well since his wife walked out four years ago. Think of Dirty Harry with a stiff upper lip.

But when a small-time thug turns up dead, Farrel’s story becomes more unusual as he gets sucked into the web of a ruthless international crime syndicate that might have already ensnared fellow cops and local politicians. And true to traditional form, it’s all complicated by Farrel’s simultaneous sexual relationships with two women who are also key witnesses.

Farrel’s Last Case is a new mystery from Gerald R. Wright, a former Royal Military Police cop who graduated to other jobs in the UK civil service before retiring in Spain. There could be no better preparation for a British police procedural where detectives and bureaucrats collide.

Wright’s wry humor permeates this well-edited, ably executed novel. He knows his way around a British bullpen, and his detective is suitably complex. The outer Farrel is as rough as a prison-outhouse corncob, but the inner Farrel is softer, wistful, even a little needy.

The plot is credible, although a little ordinary: A hard-bitten detective with personal problems goes up against a bigger, badder nemesis, even as he is starting to exorcise some of his personal demons.

The novel’s shortcomings – at least for American readers — can be forgiven if not forgotten. British born-and bred Wright has plotted Farrel’s Last Case in the uniquely polite, sedate rhythms of a classic English cozy. Sometimes, the pace feels a half-step too sluggish, although any final judgment must rest on the reader’s taste (and maybe on which side of the Pond he or she lives).

In general, there’s much to like about Farrel’s Last Case, which provides an entertaining, if occasionally overly familiar, yarn for fans of the genre.