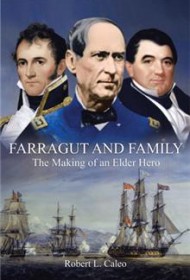 Born in 1801 in New Orleans to a Spanish-emigree-turned-U.S.-naval-officer and his American wife, Farragut’s self-assurance evidenced itself at an early age. At seven years old, he agreed to be adopted by his father’s commanding officer, Navy Commodore David Porter, in order to relieve the burden of raising five children placed on his recently widowed father. Welcomed into the Porter family, Farragut furthered his maritime heritage. At age nine, not long after his first sea voyage, he was appointed a Navy midshipman. He soon saw combat during the War of 1812.

After 50 years of diverse and respected Naval service, Farragut, then a captain, yearned to serve the Union despite his southern roots. His younger stepbrother, Commander David Dixon Porter, organized the mission to capture New Orleans and handed Farragut the opportunity to lead the assault. Confronted with considerable Confederate firepower at Mobile Bay in August 1864, Farragut issued his legendary order, “damn the torpedoes,” and proceeded to lead the Union ships into the bay. His victory there elevated him to heroic stature. In 1866, he became the first four-star admiral of the U.S. Navy.

Caleo, a retired communications practitioner, has authored several published articles on Farragut, and his detailed research reflects his interest. Caleo characterizes his narrative as a “family album of sorts” due to references he makes to Farragut’s kin. His writing is clear and peppered with citations, although accounts of Farragut’s lineage and certain battles can become dry. He briefly muses over whether heroes are born or made, but deliberately leaves that question to the reader to ponder.

Complete with chapter notes, selected chronology, bibliography, index, illustrations, and selected letters, this is a concise, first-rate profile of a four-star general. It will appeal to Civil War and naval history buffs.