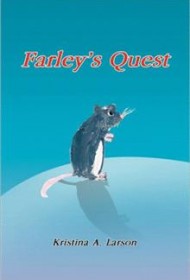 Kristina A. Larson’s novel follows the adventures of a loyal pet rat named Farley.
Farley is born in a pet store and slated to become snake food along with his littermates. But two humans decide to bring him home to live with their own pet rat family. When problems arise between Farley and one of his foster brothers, the humans give him to a young girl, Mel. But Mel’s collie, Heather, resents the newcomer for usurping Mel’s attention, and because others of Farley’s species killed one of her littermates.

Meanwhile, a villainous, megalomaniac rat named Slitthroat decides to kidnap the rat family Farley had lived with and skin them to make himself a royal robe. When Farley hears of the danger to his family, he sets off to rescue them. On the way, he meets a motley crew of other creatures, many of whom have violent or tragic pasts, and helps broker a peace treaty between two mouse kingdoms.

It is unclear which age group Farley’s Quest targets. An adventure story about talking animals suggests a children’s story. But the novel’s violence is frequently brutal and gruesome, lacking the mythic elements of books like Brian Jacques’ Redwall series that make such content more palatable for young readers. The story also contains a few fairly strong sexual references.

A violent, gritty adult novel featuring talking animals is an original, even inspired concept, but Farley’s Quest lacks the heft to be such a novel. With the notable exception of Heather, most of the characters are not well-developed enough to hold adult sympathy or attention, and the story jumps from event to event without lending much emotional depth to any particular incident. Overall, though it contains some interesting elements, the novel is not comfortably suited to either a juvenile or adult audience.