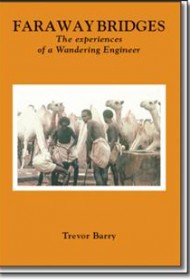 It is a tradition for the Englishman stationed abroad to bring as much of his country with him as possible, a custom that works even for those who may not be English but have fallen into the country’s orbit.

Author Trevor Barry, an Irish civil engineer, joined the British Colonial Service in 1949, spending the next 14 years in East Africa, mapping out and building roads in Kenya while living the life of an expatriate in the last years of the dissolving British Empire. In this memoir, he recounts his experiences. He joins the golf club, the tennis club and the swimming club, dines at fine European restaurants in Swaziland and embarks on several fly-fishing expeditions. This being Africa, he also faces occasionally uncomfortable encounters with a variety of creatures, from wildebeests, elephants, baboons and rhinos to scorpions in his shoes.

The sketches he offers in this memoir are often indelible. The traditional methods of the nomadic Masai for hunting lions, for example, apparently included surrounding the beast and slowly closing in while “shouting insults at it.” We are introduced to a district commissioner who seems to think he is a character out of Joseph Conrad and a road foreman rumored to be “from an aristocratic family in U.K. who was paid to stay away from home by his family.” Princess Margaret sabotages a ceremonial visit in a fit of royal pique, and a group of white South Africans is hired and finds it strange to be “in a country where the white man was not the complete boss.”

A final diversion to the Solomon Islands in the South Pacific, while lively, is somewhat distracting, but otherwise this slim narrative, told with verve and humor, is a fine insider’s portrait of two worlds, Africa and Great Britain, in a period of profound transition for both.