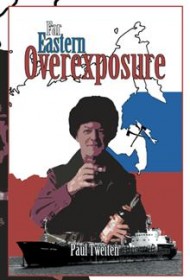 Readers may be confused as to whether this book is fiction or nonfiction. The back cover calls it a “novel,” but since author Paul Tweiten himself narrates the tale, it has more of the feel of a memoir. Essentlially, the book is a travelogue recounting the author’s adventures in the Russian countryside while managing an isolated logging operation.

After a bitter divorce, Tweiten accepts a job in a far-off country, with no knowledge of the language or idea of what to expect. He soon finds himself working alongside Russians and fellow Americans, gradually understanding the culture while trying to implement American business practices into the operation.

Consumed in work that’s a joint venture between Russian and American companies, Tweiten quickly learns how to deal with an often-belligerent Russian executive, who several times threatens to expel all American workers and goes on drunken rampages during his visits to the operation. His workmates are more agreeable but just as colorful: they work, drink, swear, and pursue bedfellows with equal passion. Although he manages to stay away from any romantic entanglements, Tweiten certainly holds his own with drinking and swearing. Given that nearly every day he must deal with equipment breakdowns, unpredictable weather, or fights among employees, one can forgive him for the expletives he utters nearly every page.

Tweiten expertly captures the experience of a foreigner in a strange land who is making friends and building a life for himself. With a plain, yet powerful style, he lets his story speak for itself. For anyone eager to learn about life in the Russian countryside, Far Eastern Exposure tells it like it is, the good as well as the bad.