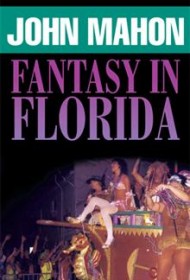 Fantasy in Florida is a thriller set in FantasyFest, a yearly Key West, semi-nude bacchanal.

Thaddeus J. Branson is a private investigator from West Palm Beach, Florida, and nothing can surprise him — that is, until a woman walks into his office and hires him to buy a bra. The request is her way to learning if she can trust the PI fully before hiring him to serve as a bodyguard for her and her husband.

Kathleen Taragano is a scientist who, along with her husband, has made an amazing discovery, and she has decided to meet a potential buyer at FantasyFest. The only problem is that there’s more than one party interested in the Taraganos’ discovery, and someone might just be willing to kill to get to it.

It’s not clear whether Fantasy in Florida is supposed to be sexy or funny (or both), but it doesn’t quite accomplish either. It’s straightforward, without much description or narrative flair. The main character, Branson, is a matter-of-fact guy who isn’t easily shocked. He’s a former military man, in every sense of the word: stoic, reliable, forthright. Once in awhile, his dry sense of humor emerges; he would have been more interesting had that humor been more prevalent. As it is, Branson feels a bit wooden. He’s just a spectator in a deadly game, but since he’s the narrator, readers will wish his character were less flat.

There’s a lot of nudity in Fantasy in Florida, but that comes with the territory of FantasyFest. Still, it can feel a bit gratuitous at times. The plot has its share of twists and turns, and author John Mahon does a good job surprising readers. But despite the solid story, the novel suffers for its lack of description and underdeveloped main character. Readers who have attended FantasyFest will likely enjoy this novel for its setting, but others may find that it doesn’t offer enough satisfactions to hold their interest throughout.