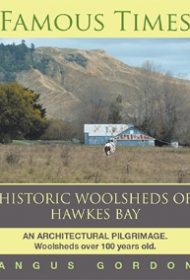 Light, landscape and the shadows of history, all have a part in Angus Gordon’s Famous Times, a photographic essay depicting historic woolsheds in Hawke’s Bay, New Zealand.

Gordon, a fifth-generation farmer on the family farm, dubbed Clifton Station, has an abiding love for the old sheep stations and woolsheds that give the properties their focus. This book is a lavish paean to those woolsheds. It is, Gordon states, “a sort of architectural pilgrimage paying homage to the vision of our ancestors.”

Gordon’s book begins with a brief introduction, written in an amiable style, followed by pages of photographs accompanied by brief text blocks. While a few of his photographs are underexposed, most have a sharp clarity, and some, where the buildings are set against a background of hills or water, are quite beautiful. As Gordon intimates in his preface, many of the sheds have a charm and elegance to their design wholly missing in their modern, corrugated counterparts. Included with the pictures of sheds are photos of homesteads, bunkhouses, old-time herders and shearers, wool-related equipment and, of course, herds of sheep.

There’s a poignancy to some of these photos, particularly with sheds that have fallen into disuse. One photo of the Hedgeley shed, which burned down soon after it was photographed, has an almost church-like quality, with barred light streaming in across a well-worn floor.

The text blocks offer a history of the stations’ ownership and, occasionally, details of the former owners’ lives, bespeaking of hardship (fires, floods, and bankruptcies) and the quirks that make life interesting. For instance, Alexander McHardy, an owner of the Blackhead farm, died in 1869 after “performing the Highland Fling.” Unfortunately, the explanatory paragraphs don’t offer enough of this type of detail to completely draw readers in.

Nevetheless, Famous Times, is a handsome offering that highlights a slice of history sure to promote nostalgia in its readers. It deserves a place on the bookshelf of anyone interested in the topic.