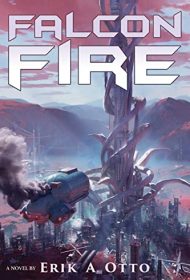 Erik A. Otto’s Falcon Fire is a labyrinthian tale of a partially terraformed Venus whose settlers have split into two factions: Reformers versus Hedonists.

Told in alternating chapters, the novel recounts the separate stories of Hix and Neeva, who are stuck in a world of political misinformation campaigns and a maze of deception and treachery.

Hix is a celebrity actor Hedonist. He was sentenced to Kanto Station, the dangerous orbital penal colony above a climate-destroyed Earth, as punishment for taking a commandeered dirigible joy ride that ended in the death of his lover, Shawna, Neeva’s sister.

Neeva is an inspector who investigated Hix. She’s from affluent NoPo, the Reformer city at Venus’s north pole, and preordained to be a powerful Keeper of First Colony heritage. Unsatisfied by what she feels was a rush-to-judgment of Hix, she’s obsessively searching the dangerous tenements of SoPo (Venus’s south pole, where the “Heeds” are primarily segregated) to find Hix’s sister and learn the full truth of what happened, since, among other things, “the cameras on the dirigible Hix had commandeered [unexplainedly] hadn’t worked.”

As the story evolves, Neeva discovers a conspiracy among Reformers to support Mantle, the Hedonist liberation movement. And when Neeva and Hix’s paths finally cross, late in the novel, they discover they have opposite stories of the Venus colony’s history and what has transpired since the Reformer Doctrine made Heeds second-class citizens.

The novel has many strengths. The labyrinthian plot is engaging, the characters well-developed, and the world-building excellent. The action is slam-bang and the truth-revealing ending satisfying.

The story’s format, however, is problematic. The constant head-hopping from one character’s story to the other’s quickly grows frustrating, as the climax of one chapter suddenly drops from sight and the other story continues where it left off, two chapters ago. Once the two stories meld, however, the tale gains speed and engagement.

Those who can overlook this obstacle will find an enjoyable plot with plenty of twists to keep pages turning.