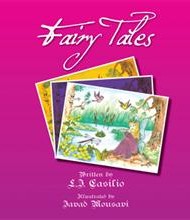 “The Fairy and Her Golden Flute” describes a beautiful fairy girl who plays the flute to warn forest creatures of seasonal changes.

“The Fairy and Her Magic Fairy Dust” tells about Mica, a black-haired fairy with rosebud lips and a purple dress, who has a negative attitude until she is given magic fairy dust that brings wilted flowers back to life. Her new power changes her outlook, and Mica brightens the glen with rainbows of color.

The final story, “The Fairy and Her Magic Wand,” echoes the second, as its fairy protagonist, Lila, also has black hair, rosebud lips and a purple dress, and also flies around the glen and neighboring areas using her magic wand to bring wilted flowers back to life. One day a little fairy disappears, and Lila rescues her using the magic wand.

The second and third stories strongly resemble each other, with similarly described (and visually depicted) characters, both using magic to revive sagging flora. Even some of the artwork (with slight alterations) is repeated in these two stories, although the characters are apparently different fairies. This confusing overlap may confound children and parents alike.

Additional problems, including long blocks of unbroken text, passive voice, shifting tenses and points of view, punctuation errors, repetition, and numerous run-on sentences, affect fluency and meaning. This passage from “The Fairy and Her Magic Wand” is one of many problematic examples: “Lila always thanked the little fairies for their hard work and smile (sic) as she would see the happiness that spread on their tiny faces. As she continued checking on their word (sic) she noticed one of the little fairies was not to be seen.”